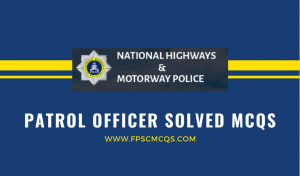 Motorway Is the longest highway of Pakistan that is assigned with the extra duties of patrolling on the national highway. The name of the motorway Police was changed to the national highway and motorway police. These police are responsible for the enforcement of the traffic rules and safety laws in Pakistan and junior patrol officer salary in Pakistan 2021. National highway and motorway police are also responsible for not blocking the traffic on the roads and facilities the people who are in trouble and control the people who are responsible for the mismanagement on the roads. So get the idea for the Motorway Police Junior Patrol Officer Salary In Pakistan in further read. The headquarter of the national highway and motorway police is in Islamabad. Firstly young employees were selected from the police force and provide them very extensive training and after that, they were appointed as motorway police for the sake of training international trainers were invited to train the force for the motorway police but at the very high expense but now Pakistan has developed its own training center college for the newly selected officers from FPSC & NTS. On this site, you can download lot of Patrol Officer Solved MCQs in Pdf for Competitive Exams in Pakistan.